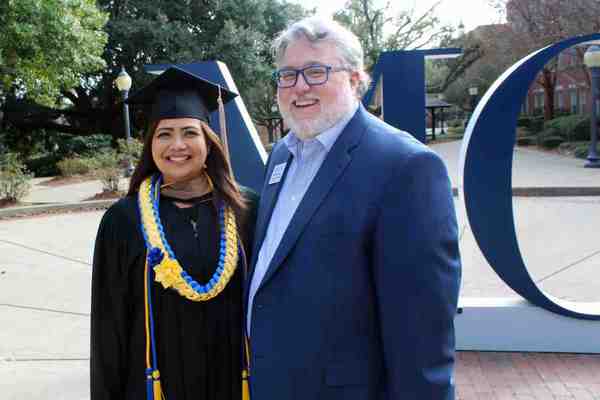 Rodalyn Gerardo of Dededo Graduates at Mississippi College With Online Business Degree
Guam is a paradise loaded with beautiful beaches in the North Pacific Ocean. An island heavily focused on tourism, Guam sits more than 7,600 miles from Mississippi College. Ties between Guam, a United States territory with a diverse population, and MC's campus in Clinton just got stronger. That happened when Rodalyn Gerardo traveled 30 hours to receive her college diploma at Fall commencement. Visiting MC for the first time at the December 20 ceremonies, Rodalyn is a proud graduate of the Christian university's online MBA accounting program.
RG

Graduation - Jan 21
Nursing School Leaders Salute New Graduates at Mississippi College
Mississippi College Dean Kimberly Sharp spoke at ceremonies to congratulate the new nurses. She says she will continue to keep them in her prayers. Sharp urged the Class of 2019 to continue to keep Christ at the center of their lives as they serve others. A cross, representing Christian caring and commitment, is superimposed on the MC School of Nursing pin. An image of Provine Chapel is imposed in the center of the pin going to the 65 new graduates.
JL
KK
BE
MS

Graduation - 2019 May 15
Saluting the Class of 2018 at Mississippi College
Maggie Wren says she "loves kids" and that's what prompted her to consider the nursing profession. Taking a major step towards becoming a health care professional, Maggie received her diploma at Mississippi College's School of Nursing commencement on Friday. Wren, 23, is a 2014 Madison Central High graduate. She went from Madison Central Jaguar to MC Choctaw and really enjoyed her learning experience since arriving on the Clinton campus. A Madison resident, Maggie Wren found the perfect fit - she will work as a nurse at the Blair E. Batson Children's Hospital. The state's only children's hospital, the innovative facility serves thousands of kids across the Magnolia State. It remains a vital part of the University of Mississippi Medical Center in Jackson. Another member of the School of Nursing's Class of 2018, Emily Ousterhout Manuel of Clinton will follow in her mom's footsteps. Her mom, Lisa Ousterhout, is a Mississippi nurse. Manuel, 25, first got interested in nursing after spending time in the hospital with her grandfather, who suffered a serious brain injury. A graduate of Northwest Rankin High School in Brandon, Emily Manuel will soon work at Baptist Hospital in the capital city following her Mississippi College graduation. Manuel says she loved "the sense of family" and how faith was woven into her daily classes at the Baptist-affiliated university. School of Nursing Dean Kimberly Sharp offered her congratulations on stage at Swor Auditorium as 92 graduates were awarded bachelor's degrees on December 14. The vast majority of the MC grads are from Mississippi communities. But there were others from California, Maine, Tennessee, North Carolina, Alabama and Georgia The new grads all offered solid reasons when asked why they joined the nursing field. "I always wanted to help people," said Hunter Riley of Meridian. The new MC grad landed a job at Baptist Hospital in Jackson. Crystal Springs resident Sara Anderson hit the books since day one on the Clinton campus and graduated with Cum Laude honors. "I always wanted to be a nurse since I was a little girl. That was the only thing." Sara begins her career as a nurse at the University of Mississippi Medical Center. Erin Wilson of Houston, Texas is also following in the footsteps of another family member. The Houston, Texas resident's grandmother served as a nurse for three decades. With her MC diploma, Erin will go to work as a nursed in the ICU unit at St. Dominic Hospital in Jackson. "I like taking care of people." Leslie McAdory, 41, seldom saw her nursing classmates in person. The Pearl resident earned her nursing diploma (the RN to BSN degree) by taking all of her MC classes on-line. She is also a Hinds Community College graduate. A talented 1996 Pearl High grad (she played clarinet in the Pirates Marching Band), McAdory already has a job. She's spent 17 years working at MEA. Based at MEA administrative offices in Ridgeland, McAdory believes her new MC diploma will help her advance with her current employer. The latest MC nursing grads join a profession with a strong job outlook nationwide. The U.S. Bureau of Labor Statistics in 2018 projects 1.1 million additional nurses are needed. The American Nurses Association says there will be more registered nursing jobs available through 2022 than any other profession in the USA. There were separate graduations held on the Clinton campus on December 14 for other undergrads, graduate students and MC Law grads. President Blake Thompson and other leaders attended ceremonies to salute the newest members of the university's Class of 2018.